The Evolution of Wayfinding: From Static Signage to Blue Dots & Beyond

When wayfinding works, we don’t even notice it. However, when it fails, our lives are derailed. We miss flights and connections, we’re late for important appointments, and we generally get really, really frustrated. While we can rarely identify the times wayfinding has explicitly helped us, most of us can certainly pinpoint the times wayfinding has failed us - like that highway exit sign that appears way too late in the game to help you make the turn.

Wayfinding, as we think of it today, is a relatively new concept. In his 1960 book, ‘The Image of the City,’ architect Kevin Lynch used the term ‘wayfinding’ to describe the tools and processes used to help people find their way. The term itself harkens back to the traditional methods of navigation used by Polynesian seafarers, and when Lynch applied the term to his research of urban spaces, he put a name to the solution for a new and increasingly prescient problem being faced by urban dwellers: How do I get from A to B, then around and inside B, then finally home to A?

So, how do we find our way around our built urban environments?

In the last 50 years, economic development has been relentless in driving an increase in complicated spaces the public is being required to navigate. From shopping malls and transportation hubs to complex hospitals and conference centers, buildings are growing in both square footage and complexity.

According to Tim Rob Don Dow, Strategic Consultant, User Experience, Behavior and Wayshowing, “when we are talking about wayfinding strategies and systems, the focus is almost always on projects that need efficiency, such as hospitals. What is often overlooked are the applications of nuanced strategy that encourage exploration and engagement.” Fortunately, our wayfinding methods are evolving concurrently to provide channels for that engagement.

The Early Days of Urban Wayfinding

We can thank automobiles for spurring the evolution of wayfinding as we know it. Directional signage became a ubiquitous part of daily life once we began driving. As it became the norm in outdoor spaces, navigational aids became a requirement indoors as well, leading to an increase in urban navigational best practices and growing expectations for our experience of place.

Initially, building developers were reluctant to incorporate wayfinding principles and would find ways to shift responsibility to other stakeholders. They tended to assume that architects would take care of signage design and indoor navigation, while architects would often leave it up to the tenants to take care of their own signage.

In the 1970s we saw the first step in the evolution of urban navigational signage design with the the advent of the Society for Environmental Graphic Design. With that, designers began to formally study how to best orient and guide the public through spaces. Wayfinding has since come into its own as both a field of study and a set of spatial design principles.

The Kiosk Era of Indoor Navigation

We can’t talk about the evolution of indoor wayfinding without giving significant attention to the omnipresent kiosk. Kiosks provide a wayfinding terminal where people can congregate at fixed points in malls or transportation hubs and map out their paths to various destinations using their memory to navigate past landmarks noted on the kiosk.

Over time, these static (read: stagnant) backlit boards at malls, mixes of markers and endless store names, started being phased out in favor of interactive digital kiosks in the late 1990s-2000s. This was arguably the first step on the path to indoor wayfinding embracing digital technologies. 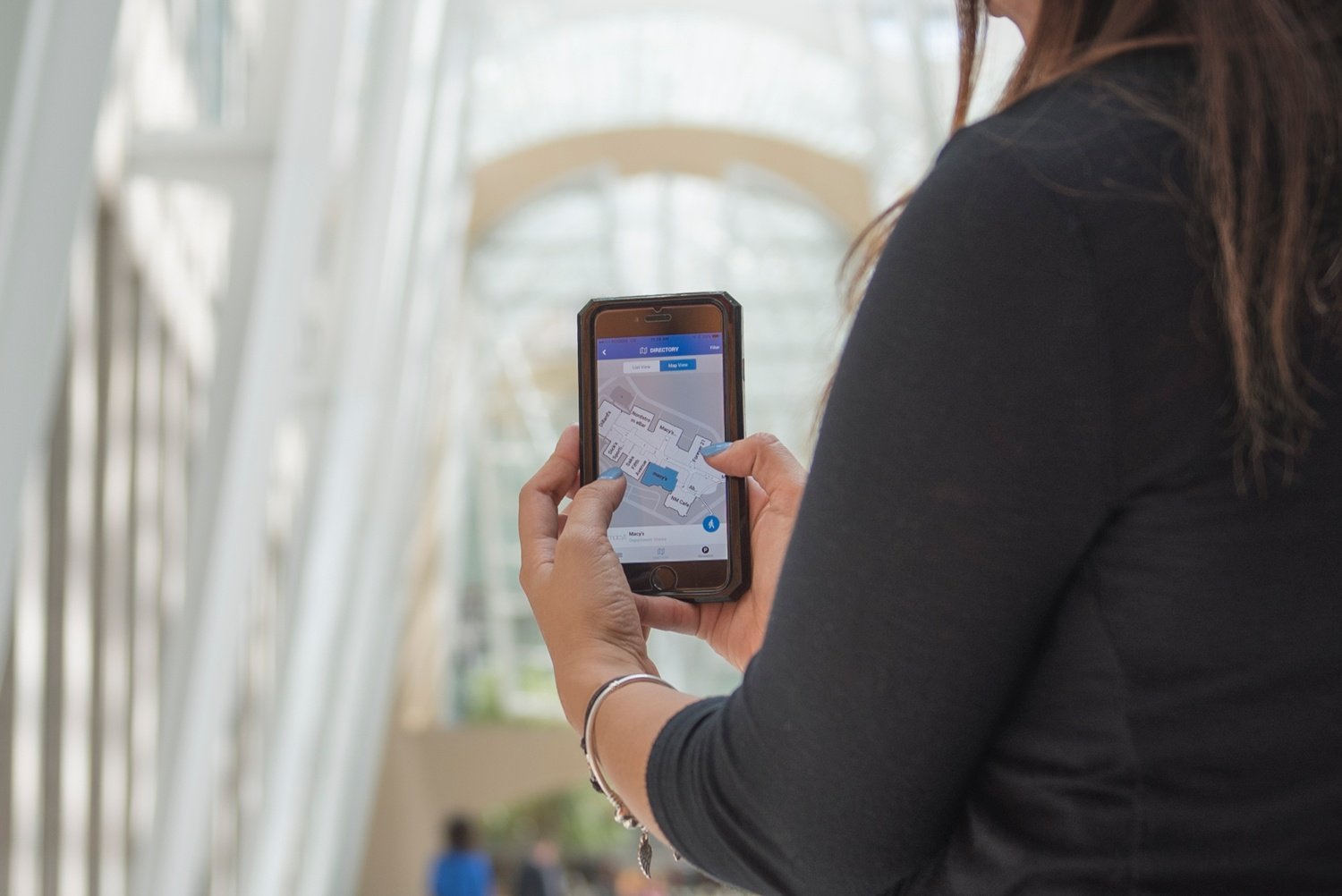 The Next Frontier - Diving into Digital Personalization

Over time, what started with rudimentary signage grew into mindful architecture and thoughtful spatial design. And it has become increasingly important as people are asked to navigate increasingly complex public and private spaces. As Dow explains, “wayfinding systems modify human behavior via visual, audible, tactile and cultural cues within a user's experience.” These modifications have changed how we expect to experience our world, and with the digital global shift, the way people navigate indoors has been changed forever.

The next wave in the evolution of wayfinding struck swiftly with the rapid growth in digital technology, satellite infrastructure, and mobile connectivity. The Internet of Things (IoT) and connected devices enabled the creation of fully integrated, comprehensive, personalized wayfinding experiences throughout the indoor and outdoor worlds. While a person’s experience of a particular place has a beginning and an end, their navigational experiences could now be increasingly fluid as they find their way along roads and through the interiors of buildings.

There has also been a greater cultural shift from the communal experience to the individual that must be accounted for in the technology we develop to address the wayfinding experience. Whereas the center of our world was once a fixed geological point in a community, it's now pinned to our personal geolocation at any given point in time. We now understand the geospatial world around us in relation to our own positioning.

In public spaces, what was once a form of communication from the one-to-many by way of kiosks and signage, has now become a one-to-one personalized experience. Mobile technologies have enabled a highly individualistic “you are here” blue dot experience for the indoor world which we have become accustomed to when navigating streets and cities. For example, our phones direct us through spaces with personalized navigation, and modern digital signage at kiosks allows you to input coordinates and shows your personal path instead of displaying a static image of a map. In many ways, our navigational experience is becoming increasingly personal.

Public and private organizations are being compelled to incorporate consumer-oriented principles of hospitality in providing these personalized experiences. We’re seeing the application of these customer service principles taking hold in transportation hubs, shopping malls, and hospitals around the world. They are making wayfinding both multifunctional and interactive by evolving to feature intelligent pathing, personalized location-based services and alerts, user-friendly interfaces, and improved location accuracy.

One unchanging factor that we’d be remiss in not mentioning is that there will always be those who opt out of various technologies, such as those who are resistant to downloading mobile apps. While the possibilities and opportunities are greater for mobile app users than those who opt out, their wayfinding experience must be considered too.

Buildings must therefore provide a comprehensive set of wayfinding cues, from interactive signage and digital kiosks, to thoughtful spatial design and architectural wayfinding principles, to IoT enabled mobile apps. As Dow explains, “regardless of a project’s design solution - be it physical, digital, or a combination of both - the solution should be informed by the theories and strategies that influence human behavior.” The modern wayfinding experience must be holistic, engaging, and accessible to all.

The possibilities are nearly limitless for how engaging the wayfinding experience can be in your building.

ABOUT THE AUTHOR
Trish Sissons
Trish is the Digital Marketing Manager at Inpixon. When she’s not digging into all things digital, you’ll find her playing in the great outdoors, running her book club, crafting, or boarding a plane heading somewhere sunny.
Featured Articles Fresh Off the Press
Mapping
March 26, 2019

3 Ways Indoor Maps are Changing Bus Stations for the Better

Read in 4 Minutes
© 2023 Inpixon. All Rights Reserved.|Privacy Policy|Do Not Sell My Personal Information