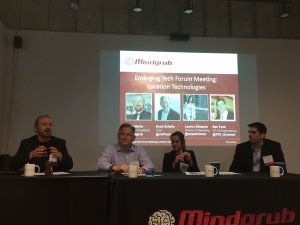 Imagine browsing the aisles at Giant or Safeway and stopping in front of the Chips Ahoy display. As you pause to contemplate your moral, financial and dietary dilemma, your phone goes off with a coupon.

That’s the sort of future imagined by Ben Funk, vice president of TRX Systems in Greenbelt, suggested during the Emerging Tech Forum, held Thursday at Mindgrub in Locust Point.

This month’s forum, focused on hyperlocal location technologies, was sponsored by the Chesapeake Regional Tech Council and brought together Funk, Inpixon marketing director Lauren Edwards and viaPlace CEO Scott Schelle. It was moderated by Mindgrub president and CEO Todd Marks.

The three mapping executives all work at different levels, with viaPlace handling wayfinding and schedules for institutions like Johns Hopkins University and University of Maryland, Baltimore County. TRX works with 3D location and mapping in indoor spaces. Inpixon deals with location-based mobile security, disabling functions and privileges of cell phones within certain zones.

“With zones, you can have one set of policies for one zone of the hospital,” Edwards said, also referencing the recent scandal at the Baltimore City Detention Center, where inmate Tavon White admitted using correctional officers to smuggle in cell phones and other contraband.

All three talked about the possibility of location technologies to crowdsource maps of indoor locations, a step further than Google’s Street View.

“You have some idea of the map indoors…but in most cases, the details of the map aren’t there,” Funk said.

Schelle touted the advantages of implementing 3D mapping and way-finding software in public places, like airports.

“At some point, they have to replace the hardware,” he said. “There’s a software solution that costs next to nothing.”

But privacy from malicious actors is paramount, Schelle said.

“In my life, in the location business… every new service we developed, privacy was the first question that was coming up,” he said.

The next Emerging Tech Forum will be held June 27 in Columbia.

The Nuts and Bolts of Wireless Security