A leading international manufacturer of formwork and scaffolding systems

Employing around 10,000 people worldwide, this international company is one of the leading suppliers of innovative formwork and scaffolding systems with tailor-made logistics, services and engineering for construction, maintenance, and refurbishment.

One of the most successful international formwork and scaffolding manufacturers set out to find a solution to control and monitor the flow of material between production and the galvanizing plant. Driverless transport systems are used to automatically handle the transport of goods from A to B across a large area with various loading stations.

The routes are operated according to strict time specifications, however, the company was not able to monitor how the routes were actually executed nor where the automated guided vehicles (AGVs) were located in the daily process. Interruptions in the process flow resulted in long search times for the employees, including identification and determination of the cause which in turn led to delays in further processing. In addition, manual handling, such as the issuing of production documents, inhibits the seamless flow of materials.

In order to comply with first-in-first-out requirements in the galvanizing plant an immediate solution was sought that would allow for the automatic identification of goods produced.

Real-time location information about the load carriers in the plant

Implementation of the FIFO process

Analysis of resource utilization, zone dwell times, routes, and more for the load carriers and AGVs to be leveraged for the optimization of material flow processes.

Association and digitization of transport waybills with INTRANAV.RTLS TAGs.

The INTRANAV.IO RTLS is used for real-time location tracking of transport racks, loaded or empty, which are on their way from the metal processing plant to the galvanizing plant. The transport racks are carried by driverless transport vehicles (AGVs). The material flow between the fully automated and semi-automated production is tracked in real-time.

The “article number & quantity” details from the corresponding production line in the metal processing area is linked to the INTRANAV.RTLS TAG which is displayed on a monitor, ordered according to the FIFO process in the galvanizing plant. One monitor per material buffer (FIFO line) is installed, which displays the information of the corresponding material buffer.

The information linked to the INTRANAV.RTLS TAG has to be retrievable by an employee at any time. This is enabled by a barcode on the tag which displays the information on a browser app in the company’s internal WLAN via the contractor’s website.

Associating the Transport and Article Information with RTLS Tags

When a transport rack is loaded and ready for pickup, the article number and total loaded quantity is linked to the INTRANAV.RTLS TAG via the INTRANAV.IO platform. In the case of fully automated production plants, the trigger for updating the information (after completion of the loading process) comes from the plant control system itself.  For semi-automated production plants, the trigger is initiated by an employee using an Android, iOS, or Windows device. INTRANAV.IO accesses this data (article number/number of pieces) via an interface and links it to the TAG (the TAG ID) as described above.

The scaffold manufacturer tracks the transport racks, loaded or empty, in real-time via the Digital Twin platform, INTRANAV.IO, on their way from the metal processing plant to the galvanizing plant. The entire material flow between the fully and partially semi-automated production, which is carried out by driverless transport vehicles, is digitized via the INTRANAV IoT platform.

The IoT platform displays the production progress in real-time with the transport orders of the AGVs and their quantities. In the event of disruptions or bottlenecks, an alarm indicates a deviation in the process alerting employees to intervene immediately. 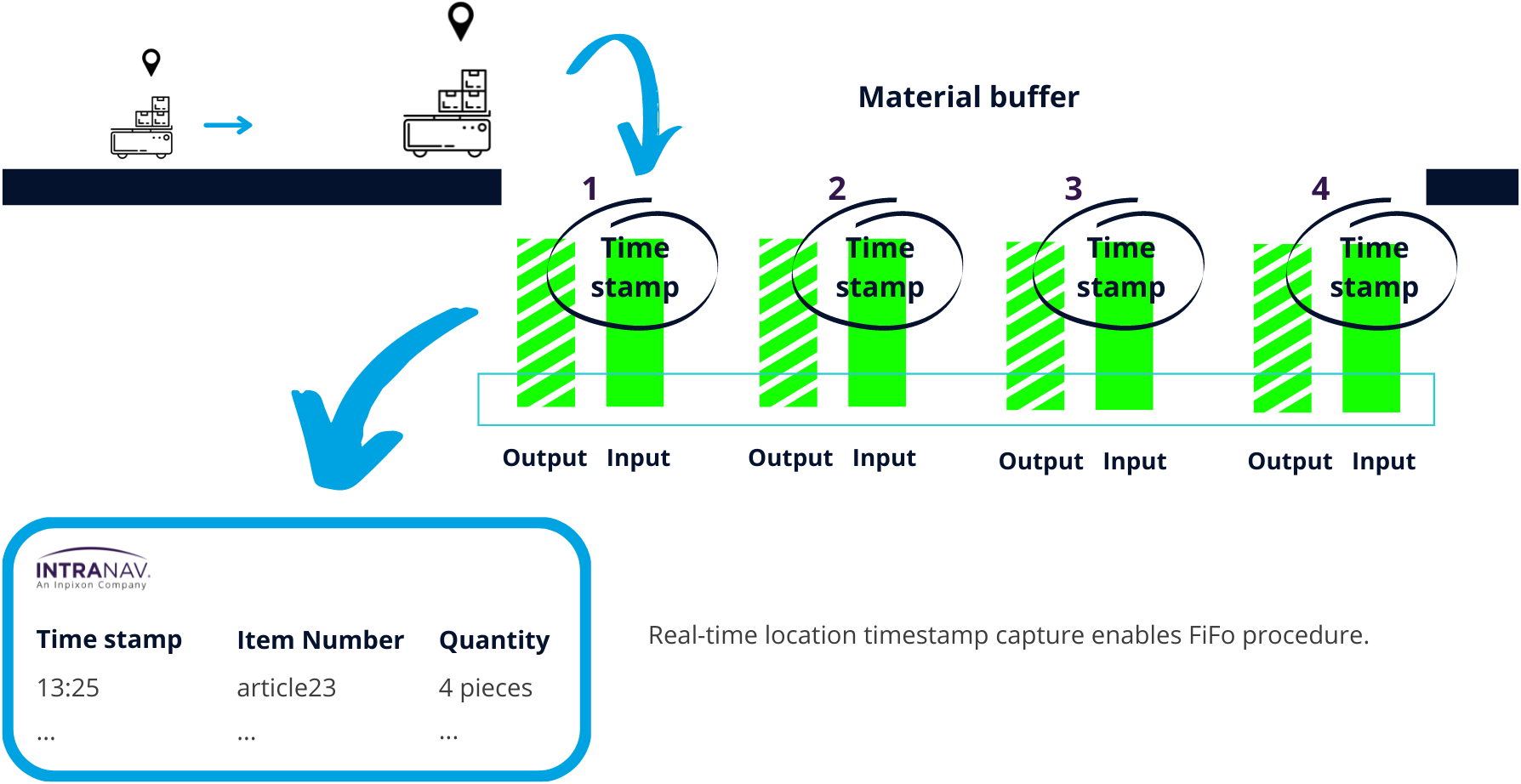 Through an interface, real-time tracking data is imported in a structured format into industrial analysis software, which analyzes the overall resource utilization of AGVs and transport racks. The examination of the utilization and transit times, such as downtimes or throughput times, helps to identify weak points and improve them for the further course of production.

The INTRANAV Digital Twin can be used to monitor the progress of the control center of the material and transport process at any time. Integrating the article data into the respective rack completely eliminates the use of paper accompanying slips. Reviewing the real-time location data also helps the manufacturer to continually optimize transport and production processes.

There are many benefits to using Inpixon's smart factory solution, including:

If Inpixon’s INTRANAV IIoT production solution is of interest to you, contact us to talk about optimization possibilities for your production and logistics workflows today!

Ready to see what you can do with Inpixon?
Contact us today!