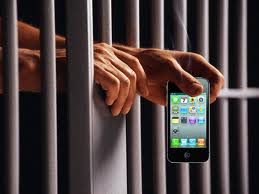 INDIANAPOLIS (AP) — A drug ring that two Indiana inmates allegedly ran behind bars using cellphones to orchestrate drug purchases and sales shows the risks posed by the widespread problem of the phones being smuggled into the nation’s prisons, officials said.

Contraband cellphones are so common that even Charles Manson, one of the nation’s most notorious inmates, has been caught at least twice with cellphones in the California prison where he’s serving a life sentence for his role in the 1969 murders of seven people.

“There’s been criminal activity being orchestrated from prison as well as actual threats to individuals,” said the Houston Republican who’s vice chairwoman of the Texas Senate’s Criminal Justice Committee. “There have even been instances where they’ve tried to contact witnesses or victims with threats, calls about changing their testimony.”

A federal indictment unsealed Wednesday in Indianapolis charges two inmates at different Indiana prisons — Oscar Perez, 26, and Justin Addler, 28 — with using cellphones smuggled to them by prison guards to run a ring that moved heroin, methamphetamine and other drugs in cities around the state.

OTTAWA - Criminals who run their operations from behind bars using mobile devices could soon be left searching for cell service.

The federal government is asking companies how to stop prisoners from making calls on smuggled cellular and smart phones, tablets and other wireless devices.

Such devices are banned in jails — but evidently, that hasn't stopped prisoners from getting hold of them.

"Though this prohibition is rigidly enforced, upon occasion, mobile devices are recovered by correctional officers from inmates within an institution," says a notice posted Tuesday on a government contracts website.

"It is, therefore, of significant importance for (the Correctional Service of Canada) to develop an effective and sustainable method of preventing the use of mobile devices by inmates in support of its public safety mandate. To that end, CSC seeks a solution to impede the use of contraband mobile devices within the confines of correctional institutions across Canada."

The notice gives no indication about the extent of the problem in Canadian prisons.

"Similarly to other forms of contraband, cell phones can and have been smuggled into institutions in offender personal effects, by inmate visitors and some staff/contractors, by inmates in their body cavities, hidden in deliveries to the institution via supplies and or the kitchen, and in throw overs just to name a few," Veronique Rioux said in an email.

VANCOUVER - Federal inmates who use smuggled cellphones to coordinate drug purchases or gang hits could soon hear nothing but dead air on the other end of the line.

In an attempt to squelch the use of contraband mobile devices, Canada's corrections agency is exploring options for installing radio-jamming gadgets in prisons.

But before they move forward with any contracts, officials want to be certain that the technology doesn't interfere with legitimate calls made within or near prisons.

According to a request for information published on a government contracting website, corrections officials say they are seeking input from industry experts on a number of questions related to "mobile device access denial" services.

Can 911 calls still be made within an institution? What are the chances that someone living near a prison could be adversely affected? Are there ways to bypass or defeat cellphone jamming technology? If a mobile device is detected inside a prison, does technology exist to allow officials to call the phone or turn it off automatically?

Earlier this year, the House of Commons public safety committee heard testimony about all the different ways drugs get smuggled into prisons.

Drugs have been found in pens, slices of bread, packages of ground beef and in the lining of inmates' clothing. Sometimes, they're hidden in tennis balls, arrows - even in dead birds - and then sent over prison walls using potato guns, bows and slingshots.

Prisons turn to technology to thwart use of contraband cellphones

Cell Phones Are the New Black