For our client, an agricultural machinery manufacturer, tractor pre-assembly requires pneumatic add-on modules for the axle which are manufactured in one location and then transported by route train to the axle assembly line on the production site, where the axle is then assembled. The manufacturer has a very high sequencing effort due to a large number of part variance, which is why there is a risk of confusion when picking components very quickly. The high volume often also makes buffering more confusing. In general, sequencing errors can quickly become expensive if they lead to high rework costs and thus to delays in the completion or delivery of end products.

To optimize transportation utilization and flow, the company turned to Inpixon. They were looking to improve logistics control through component and inventory tracking in addition to implementing route guidance from pre-assembly areas with the desired goal of minimizing waste and significantly reducing rework costs. The real-time location data obtained by using Inpixon’s INTRANAV IoT and RTLS technology is then leveraged to analyze material throughput times and to optimize the flow of material. 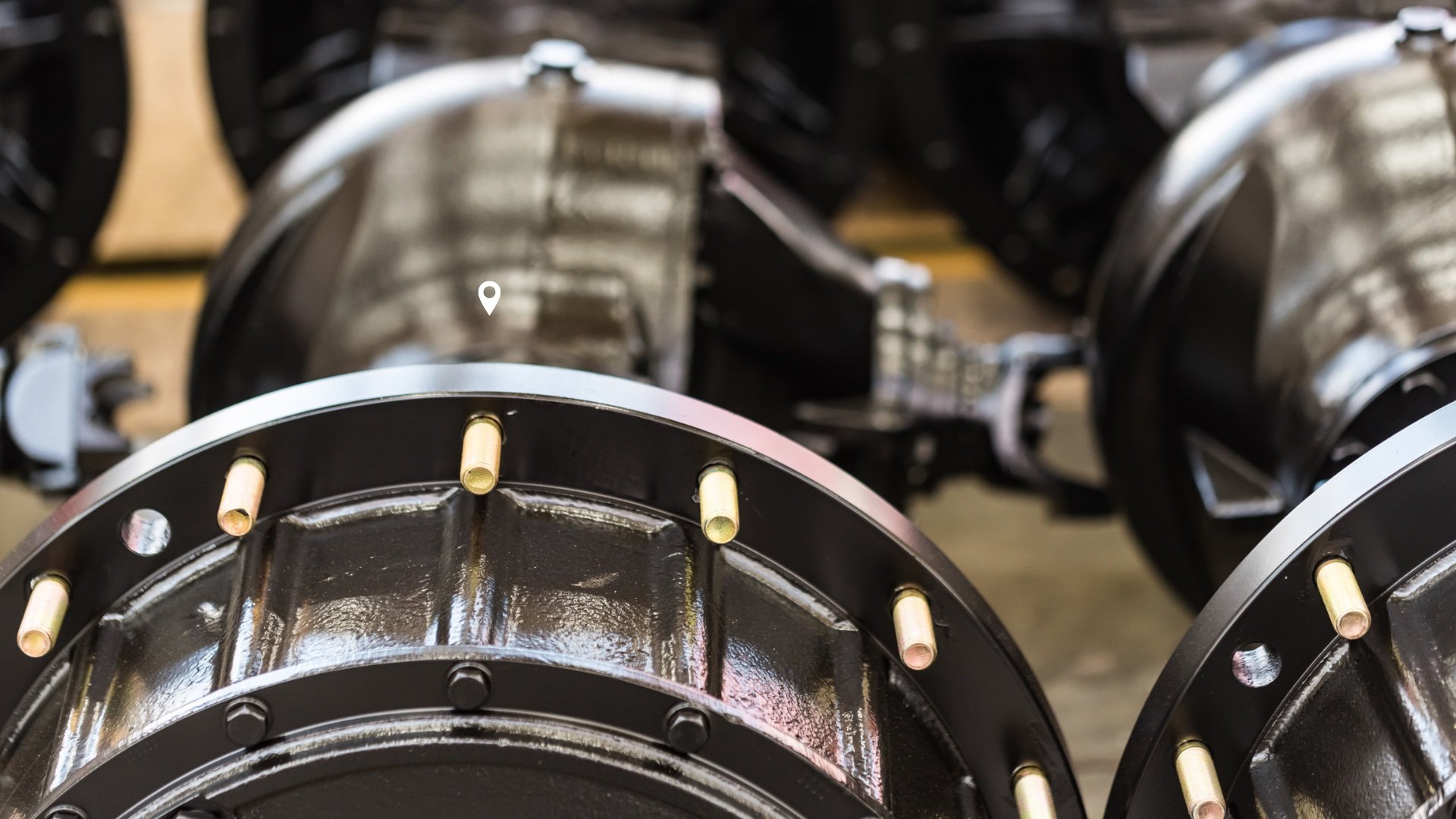 Order to order matching of the load carrier components

Due to high variance at the main assembly, pneumatic assemblies must be recorded in the MAS/SAP system during pre-assembly with the order and the load carrier.

Sequence/plausibility check during component picking on the assembly line

In order to avoid incorrect assembly, quality control must take place at the assembly line for automatic component picking by matching items via a parts list in main and subgroups.

With INTRANAV’s real-time location solution at the production line, our customer was able to address their requirements

Order Matching during Model Production for the Axis 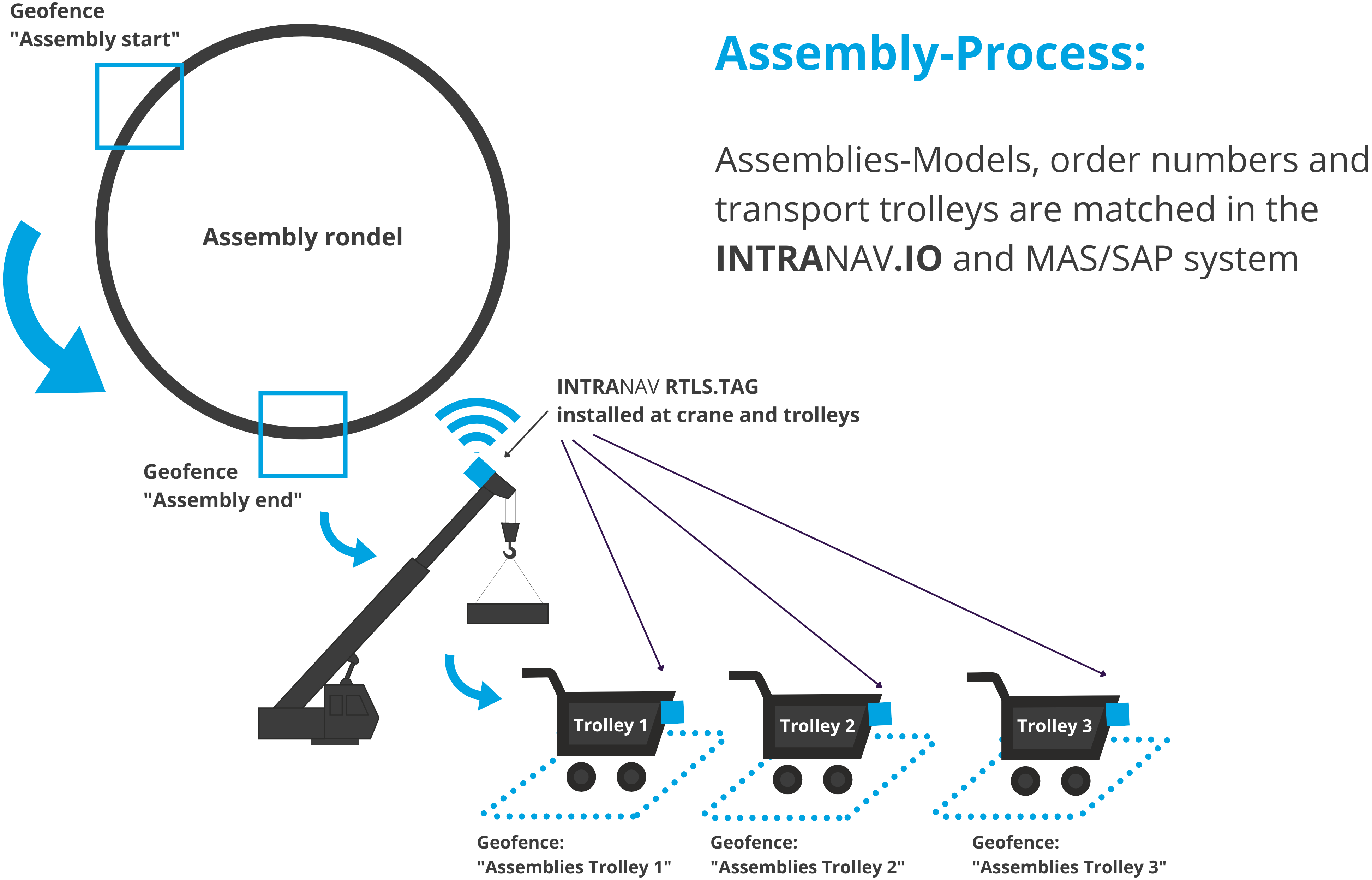 For real-time tracking of pneumatic assemblies, the assembly roundel, the picking crane, and transport carts are equipped with INTRANAV.RTLS TAGs. The tag on the roundel receives the order number from the respective assembly component, which it is carrying on the conveyor at the time. Two virtual zones, also referred to as geofences, are set up around the roundel. These geofences are responsible for order matching. As the roundel enters the starting point of the geofences, the component order number is systematically associated with the RTLS tag; this is done via an interface in the client's multi-agent system (MAS) or SAP system. The component is tracked in real-time until the end of the cycle. At the end of the cycle, the assembled module is lifted by crane onto the transport trolley, which can hold a maximum of five different modules or order numbers. There is also a geofence around each trolley parking space so the system can recognize which assembly module is in which transport trolley. At the completion of this process, order matching (transport-order) has taken place.

After transport trolley matching, the assembly models are transported to the axle assembly line. Dynamic geofences are placed around the transmission skid via INTRANAV.IO, where a plausibility matching process is performed. The parent assembly number carries all of its child sub-assembly numbers in its BOM structure, which allows the system to match them to prevent installation of the wrong components. The INTRANAV system checks if the assembly and order number from the skid matches the transport trolley and the crane then picks according to a defined first in first out (FIFO) sequence.

A plausibility check is done by order number matching of the component skid. If the match is positive, crane picking takes place on the assembly line. If the plausibility check is negative, this is indicated on the dashboard via the INTRANAV software, the incorrect order is recorded in the database, and the model is booked as “canceled” prompting the order number to be deleted from the crane tag and the model is not picked.

➜ Real-time location tracking of the route trains for dynamic control of empty wagon pickups. The driver is shown how much time is left for picking up the transport trolleys.

➜ Tool tracking to prevent the loss of tools caused by sharing with other workstations or unscheduled maintenance work. Ensure specialty tools are where they’re supposed to be when needed with INTRANAV’s real-time tool visibility.

➜ Path analysis for a lean production flow, to optimize routes, and to eliminate wastage all through a standardized database.

With INTRANAV’s real-time material flow control and tracking solution at the two workstations, the agricultural machinery manufacturer significantly reduced the risk of errors during the picking processes.

Summary of the results achieved:

There are numerous benefits to using INTRANAV´s order matching and plausibility checks, including:

Interested in how our smart factory solution can benefit your enterprise? Contact us to talk about optimization possibilities for your production and logistics workflows today!

Ready to see what you can do with Inpixon?
Contact us today!