I’ll Take My Eggs With A Side Of Beacon 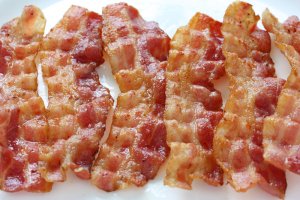 Using contextual data to offer users personalized and relevant advertisements, using location data to nudge consumers towards stores and products they may be unaware of, or physically following how much time consumers spend at certain places - the applications for data tracking with smartphones is endless. Beacons are the most recent way to obtain and apply this data.

A beacon is a small device that uses Bluetooth low-energy (BLE) to exchange data by radio transmission. Essentially, beacons can be placed at a variety of locations throughout cities or shopping malls, and can transmit data about a user’s location. Recently, The Capital Broadcasting Company utilized beacons in the Durham Stadium in North Carolina to track traffic throughout the stadium. The CBC is using information obtained from beacons to track certain metrics inside the stadium such as how long it takes people to get to their seats and how long the wait is at a concession station. Additionally, airports are considering implementing beacons as a way of following customers and sending them push notifications about flight delays or other sudden changes. The ultimate goal is to better understand the customer and create more enjoyable experiences for them.

The limits for this technology have yet to be discovered. Imagine the small boutique: a customer walks into the store, the beacon picks up on her whereabouts and then sends a coupon or flash sale directly to her phone about a product she may be interested in. The advertisement is not only relevant to the customer, but also arrives at a key time when she is likely to make a purchase. Relevance and timing: advertising at its smartest. The next step is a broader scale at the industrial level.

One such industry are major publishers. Matthew Davis, VP of Marketing at StepLeader, who builds and monetizes mobile apps, describes that:

“Publishers may soon understand how an app’s users behave over time, also based on which beacons they bumped into…the end goal is audience understanding, curated over time, to improve mobile advertising and to build more relevant mobile products.”

Furthermore, use of mobile publications, such as L.A. Times or The Wall Street Journal, has steadily increased. In a study by the American Press Institute, 59 percent of Americans reportedly use their smartphones to access news. With beacon technology, publishers could construct advertising campaigns with exceeding personalization to a reader’s daily activity and interests.

This brings to mind the advertising seen in the futuristic film Minority Report, starring Tom Cruise. In the film, when an individual walks by an advertisement (picture a bus stop ad by a bench), the advertisement changes and personally addresses the individual walking by it. Although the recent shift in advertising now focuses on smart phones instead of billboards, the idea is still the same: the idea that technology can finally allow advertising to become a custom, tailored experience throughout your day.

By collecting data of users’ previous purchases while concurrently seeing where they generally go, publishers could send ads directly to consumers that fall within their interests and appear at a time when the user is geographically likely to make a certain purchase. This would lead to highly personalized and effective advertisements that are increasingly relevant to the people.

This notion goes further than publishing; it goes to the root - advertising. If advertisement agencies cannot deliver successfully for their clients, they are going to be out of a job. Right now, beacons seem to be the most efficient way to collect and distribute data. Worried about privacy? The data from beacons is anonymous and opting-out is always available. As the technology evolves, so will our expectations and it will be up to the corporations, large and small, to keep up with what we want - a tailored experience that literally fits seamlessly into our pockets.

Will Adams is a Santa Monica based sales and marketing professional who worked with AirPatrol from 2014-2015.

The Limitations of BLE Beacons for Indoor Location Tracking